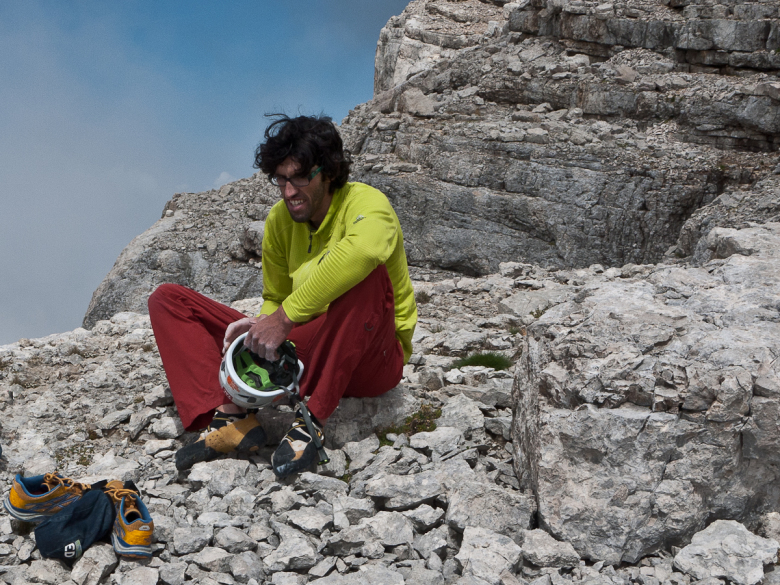 I have been plagued by inner turmoil for some time now. It is difficult to explain; a drive revolving around pure motivation, egotism and a hankering need for solitude, which grows exponentially within me. This state of mind is impossible for me to share with others. Who am I supposed to tell? Who is genuinely going to understand and from whom do I need to ask permission to realise my goal? Such questions, although left wide-open, trigger much thought and internal debate that only I, alone, can resolve.

Free solo involves so much more than just the physical act of climbing. It begins directly under the route. A long, patient wait is accompanied by a yearning that begins as a small spark in a dream and develops into a blaze, roaring ferociously out of control. Keeping this yearning to yourself is the tricky part. It is something that one cannot openly talk about, but those who know me well can see the fire growing in my eyes. Only a few friends eventually confront me about my participation in free solo climbing and they express mixed feelings. It is hard for them to accept that their friend wants to risk everything and climb a big wall without a rope. This aside, they understand and believe in me.

In the case of my next project, it was my close friend Motte who sensed my inner unrest. I told him about my plan to climb “Mephisto” on the Heiligkreuzkofel in the Dolomites without a rope. Motte was unable to look me in the eyes as we talked, but he wanted to travel with me to the start of the route and wait at the summit for my return. I felt a sudden inner peace. Motte’s support and understanding was the last piece of the puzzle that I needed and I was ready. He was going to pick me up the next day at 06.30 in the morning. If everything went well with my own plan, I then wanted to climb “Moderne Zeiten” on the Marmolada south wall with him; a route that he had wanted to climb for some years.

“Mephisto” was a ground-breaking route climbed in 1979 and the first route graded UIAA 8 in the Alps. I made the decision to solo this route two days earlier whilst climbing it for the first time with my girlfriend. The crux pitch is complicated, exposed and very committing. Upon reaching the belay of that pitch, I looked back down at the holds and dishes breaking up the compact limestone wall and immediately accepted that this route would be the one. We eventually reached the summit and enjoyed our collective success. On the walk back to the car, however, I could not help glancing back at the west wall of the Heiligkreuzkofels.

What happened next is difficult to put into words. On the morning of 26. August 2015 Motte and I said goodbye after reaching the foot of the route. I was filled with elation after having finally reached this point. After a good hour of intense climbing, I sprinted through the last chimney and reached the summit. A loud scream of joy and one last look down at the cloud-shrouded face, followed by Motte’s welcoming handshake are all that remain of that moment in time.

After four years patiently waiting to find another project, a long-term dream has become reality and I am able to add another chapter to my passion of “free solo” climbing. 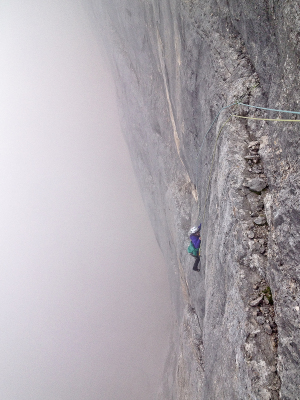 Looking down the crux pitch of ‚Mephisto‘. © Archiv Auer 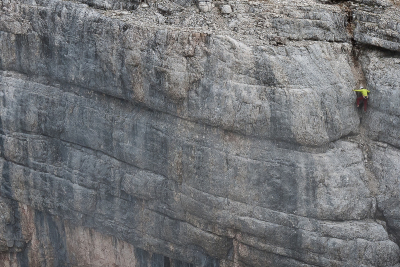 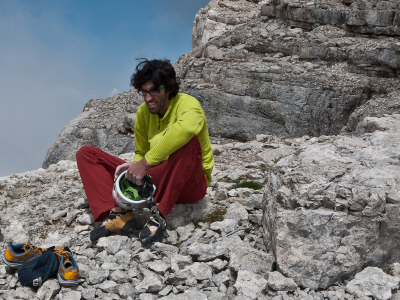 On top after the ‚Mephisto Free Solo‘. Mentally exhausted but happy about what happened. ©Archiv Auer/Mathias Nössig 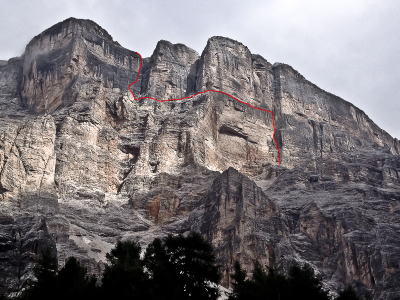 The Westface of Heiligkreuzkofel and the line of ‚Mephisto‘. © Archiv Auer