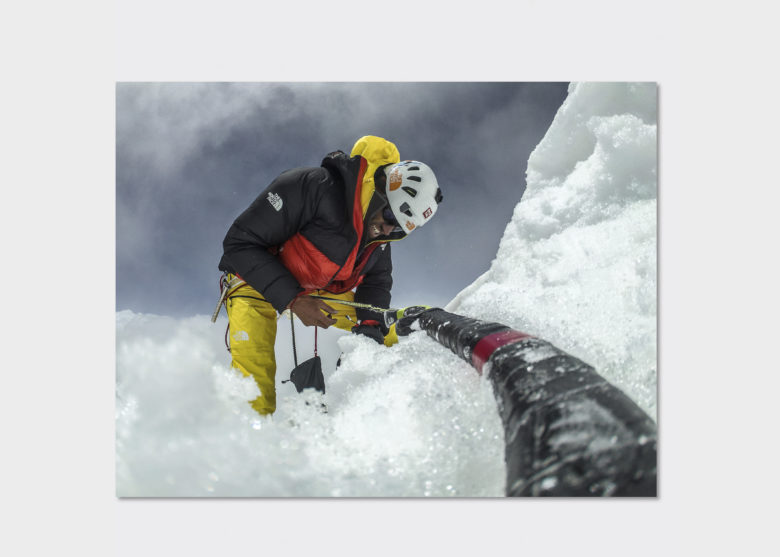 On July 7, 2018 I solo-climbed Lupghar Sar West (7157m). This peak in Pakistan’s Karakorum range was first climbed in 1979 via the Southwest ridge by a German expedition led by Hans Gloggner. Climbing completely on my own, I set off on July 6 and climbed from base camp to a good bivy spot at 6200 meters in 7 and a half hours. The next morning I climbed a line on the left side of the West face to reach the steep Northwest Ridge. I followed this past some very loose rock and reached the summit at 11:30 am. The descent proved both complicated and tiring but nevertheless I made it down safely to base camp at 20.00 that same day. Read more about this very unique experience below:

Your expedition almost ended before it began, you lost some equipment on the difficult approach…
In all my years of expedition climbing I’d always thought that this would happen sooner or later. The worst moment for this to occur is maybe on a solo expedition, because you obviously have fewer options when equipment is missing. Luckily though it wasn’t the drum with the most important items and, much more importantly, luckily it was only the drum that fell down and not the porter!

What did you think when you first saw the mountain?
When we arrived at basecamp the weather was bad, so I couldn’t see Lupghar Sar. In the evening though it cleared up a bit, and first I saw the amazing peak of Ultar Sar on the opposite side of Hunza Valley and I was simply overwhelmed how beautiful this mountain looked. While gazing open-mouthed, one of my Pakistani friends nudged me and said: “Wait for what’s coming into view on the other side.” A couple of minutes later I saw Lupghar Sar. Just as beautiful.

You immediately started your acclimatisation. You’ve done this again and again in the past. Presumably through this was different?
Acclimatising during a solo expedition is super boring. In addition, I didn’t have the best weather.
Luckily I found some nice climbing, which was good for my motivation while adapting to the thinner air. And have to say that I felt stronger than on previous expeditions, which was pretty cool.

Then you scoped an approach. What was your “feeling” with the mountain at this point
It wasn’t so easy to find the right approach, so I decided to some time looking for the best way to the base of the mountain. The upper Baltbar Glacier is pretty wild, falling into a crevasse is the last thing you want to. In the end though it turned out to be less complicated that I had originally thought. But I wasn’t entirely sue which line on the face I should climb. I had two options and just let the time pass as I waited for what my inner voice would tell me. To answer your question, right from the very beginning I had a good feeling with the mountain.

When you finished acclimatising and you set off almost immediately. We had expected a long wait in BC for the weather window.
Me too. But then I was given was a first chance. There were still some high winds but I wanted to use that chance, because you never know if you might need a second attempt. I remember the morning when I set off from BC, it was still snowing a bit. But my focus was very strong. So I started climbing. In the end this weather window turned out to be much longer than just the three-day initial forecast.

Can you tell us about the ascent. What went through your mind?
The first day went really well. Javed, my guide, accompanied me for a while, he’d asked me if he could join me for the first two hours to reach the start of the glacier. It wasn’t easy for him to see me set off alone and I understood that very well. In the evening at the bivy I had some unexpected doubts about what I was doing up there. I was at 6200 meters already and I wasn’t sure if I could deal with what was looming above. I wasn’t worried about the technical difficulties, it was more a question about being alone. Then I started thinking back to the Dolomites, to the Alps and I just told myself that I’d climbed solo so much already. It helped.

Hansjörg, that ridge looks frightening…
From below the ridge actually looked OK. I chose a line on the left side of the mountain and reached the Northwest ridge at around 6900m, until there I’d climbed mostly ice between 50-55°. On reaching the ridge I stashed all my gear and continued towards the top. The problem was that the rock quality was really bad. Halfway up the ridge I was certain I’d made a big mistake in leaving the rope down below. The climbing was circa M3, one section M4. Not more, but plenty enough for me climbing solo on the 7000m border. But at that point I’d entered back my usual solo mindset. I could see the summit cornice and my climbing felt very solid. After the rocky section I had to move up two steep, hip-deep snow fields. That was even scarier.

Tell us about the summit
Just below the summit cornice I found an old rope.I guess it’s from the first ascentionists – it looked very old indeed. Then I moved up to the highest point and tried to enjoy the moment as much as possible. The clouds were building fast. I spent half an hour on top, called my girlfriend via sat phone as promised, and thought about all my friends. In particular about Gerry Fiegl, who should have been up there with me to experience this unique atmosphere.

The descent, if we’re correct, was harrowingly close to the limit…
No, not at the absolute limit, but I did feel very tired. On the way down I climbed very slowly and rested often. I took a 15m fall over the Bergschrund when the snow bridge broke. I then reached my bivy spot and decided to keep on going down towards Basecamp. I took me five more hours to reach the moraine, where Javed came up to greet me, not knowing that I’d been on the summit. He was very relieved to see me.

So how difficult was the ascent, physically? And psychologically?
I have to say that I felt in a very good shape this year. The moments you get to solo a high mountain are very rare, so you need to use every chance you’re given. When climbing alone, everything feels more focused on the actual performance, more than the emotions. Climbing alone at high altitude I felt far less emotions than I was used too. Interestingly, this made pushing aside psychologically difficult moments of doubts much easier. Maybe because my focus on reaching the summit was even stronger. And if you climb alone, you need that really strong inner drive, because nobody is there to help you in those moments of lack of motivation or doubts.

Had you been with someone else, how do you think things would have unfolded?
Hard to say. It’s simply a different experience being alone. You just can’t compare them.

Talking about someone else: how much contact with the outside world did you have?
Actually I had only contact with my girlfriend during the expedition. I wanted to stay super focused. Before departure nobody told me that it was a bad idea to go solo, not even my girlfriend, Alex Blümel or my brothers, which I was very thankful for. And the phone call I received from Simon Anthamatten right before leaving was very motivating and he gave me complete psychological support for my project. As he introduced me to high altitude mountaineering back in 2013, I hold him in high regard. He’s the man.

How do you rate this ascent?
What I’ve done is nothing new. There have been much harder solo climbs on high mountains in the past. I view it more like a step back to a purer style of mountaineering. But if we’re talking about attempting peaks in a pure style, the achievements of climbers in the 70’s and 80’s are still the benchmark!

Hansjörg, one of the main reasons why you wanted to go is that you wanted to know what it feels like to be alone at altitude. So how does it feel?
Very, very good. I’m happy that I’ve experienced this and it’s certainly very different from being in a team. Decision making in particular is not easy, you can’t discuss things and can’t asked anybody for advice. Even if you can’t climb the hardest technical routes, it adds a bit of spice to the entire process.

How much better do you know Hansjörg Auer now?
Before I departed I confessed to my girlfriend that I don’t know why I so need to do this things. After this expedition, unfortunately there’s still no answer. Maybe there will never be one. 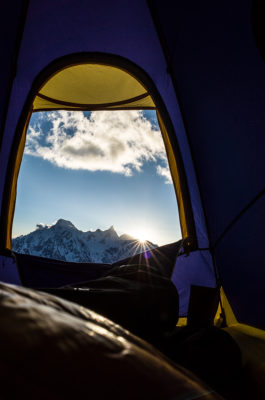 View from my tent to Ultar Sar (7388m) and Shispare (7611m) while acclimatisation time. © Archiv Auer 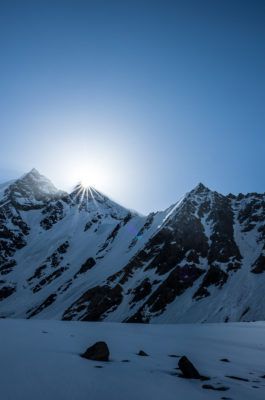 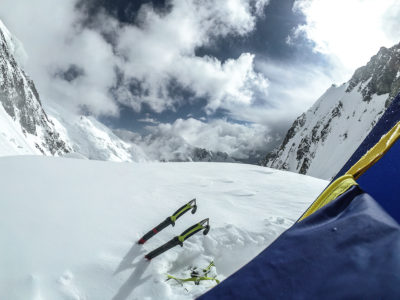 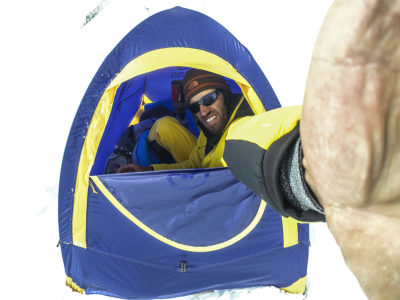 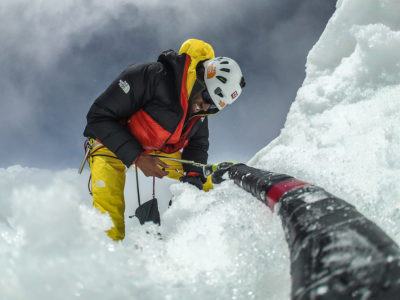 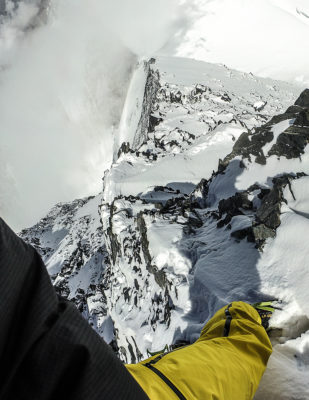 View down the Northwest ridge from 7000m. © Archiv Auer 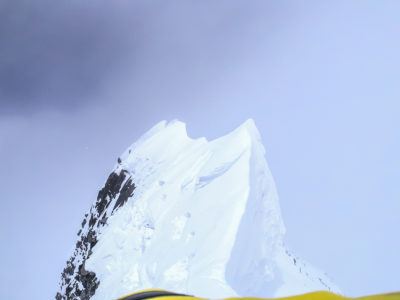 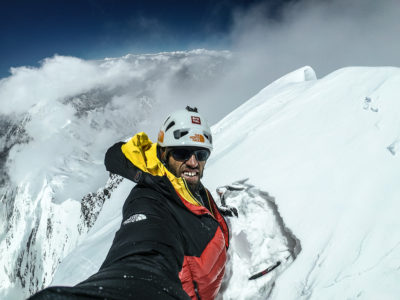 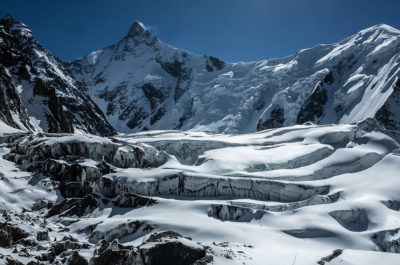 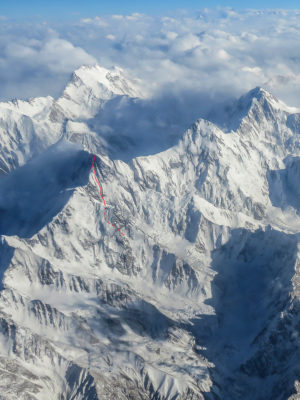 The climbed line along the West face. © Archiv Auer