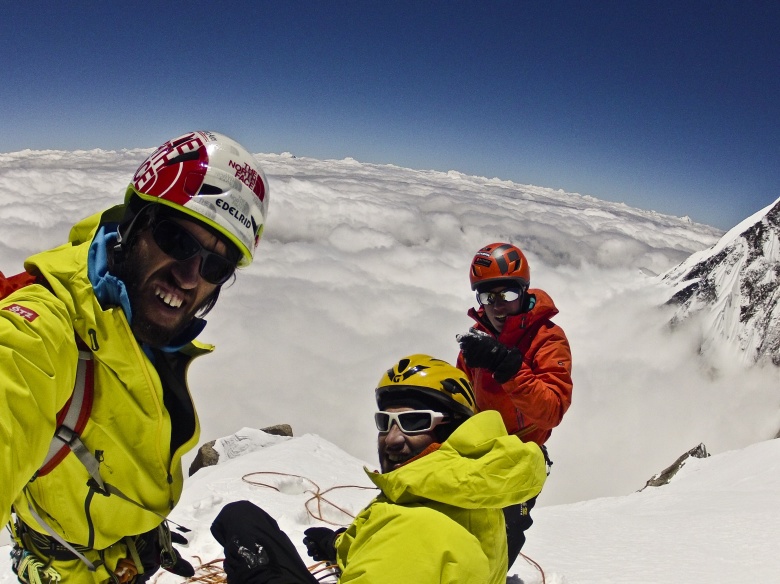 The 7400m Khunyang Chhish East is a sub peak in Kunyang Chhish massif, Hispar Muztagh, Karakoram. With the main summit being 7852m, it is the 21st highest independent peak in the World, and was first ascended by a Polish team led by Andrzej Zawada in 1971. However, despite several attempts, the East peak remained unclimbed until now. The best attempt so far has been made by the American duo Steve House and Vince Anderson in 2006. Unfortunately just 300m short of the summit they had to turn back, their efforts seized by a steep rock step. The 2700m Southwest face of Khunyang Chhish East has widely been regarded as one of the great remaining problems in alpinism.

We were walking along the moraine of Hisper Glacier when we first came into contact with our project. On a green terrace at Dachigam where the Pumari Chhish Glacier floats out from the base of Kunyang Chhish I whispered to Simon: „I can´t believe it. It´s definitely a monster“. I was in awe with the dimensions. The big amphitheater, formed by the South, Main and East summits is one of the wildest places I´ve seen. We kept on moving towards Base Camp. Suddenly, Simon stopped again. The clouds were lifting and now we could see the whole Southwestface up to the summit pyramid of Kunyang Chhish East. We looked at each other, a deafening silence arose with the realisation that we had only seen half of the peak earlier that day.

The expedition did not start according to plan. Initially we had problems with receiving a permit for Kunyang Chhish East, which delayed the expedition by a few days and unfortunately when Simon called me from Bern to tell me that his passport issues had been resolved five minutes later Matthais, my brother, called. He was on his way to hospital because he had severely injured his thumb. After hearing the news I felt confused, sat down and tried to calm down. We had invested so much time in this project, researching and training. It felt like the balloon had burst however obstacles are part of life’s rich tapestry, so Simon and I decided to go ahead and venture off into the unknown.

Exactly 20 days later we set off for our first attempt on KC East Southwestface. It was June 25. The time in between was characterised as acclimatisation days. Slowly we tried to get used to the high altitude, climbing some ridges and little faces near Base Camp and as a final step we summited Ice Cake Peak (6400m) and slept on top. When we came down we had just one rest day before packing for the first try on KC East.

In the meantime Matthias arrived. But due to his injury and due to his lack of acclimatisation, it was not possible for him to join us. He couldn’t even join us on our ascent of Ice Cake Peak and that hit him hard, but we had to follow the rules when playing with Kunyang Chhish.

Simon and I felt really strong on the first attempt of KC East. On the third day, as the weather was starting to change and the winds were getting stronger and stronger we reached a small bivy spot at 7000m. It was only 2pm but the conditions didn´t allow us to continue with the climb. The spot was really exposed to the weather. I will never forget this night just hoping that we would not be blown away into the darkness of the Karakorum. The next morning it was even worse. Through the little zip of our tent, the snow was pressed inside. Normally I´m really good during hard situations on mountains suppressing my emotions. But suddenly at around 8am I knew that if we don´t react now, the mountain will. We packed and fought our way down to the base of the wall. After 14 hours, cold, shattered and emotionless Matthias was happy to see us alive and helped us carry our backpacks out to Base Camp.

Four days later we made another try but many avalanches and tons of fresh snow forced us to retreat at 5600m. We climb up to the third serac and waited while avalanches swept down the face. We started too early to catch the weather window. We were angry but in the high mountains, everything has to be perfect. The difference between failure and success is minute and any mistakes are not forgiven.

Disappointed we reached Base Camp. Although we had three more weeks’ time, it was clear that we had just one more attempt available. The failed attempts wear you out. We tried to cool down, slept a night and it then became clear that now we had to take the chance. Hook or crook.

Matthias’ acclimatisation was still not on the same level as Simons’ and mine. Alone, he just could climb up to 5500m. But this is not enough for KC East. He should climb at least Ice Cake Peak. Together with Simon he started for a two day push, while I chilled in Base Camp and searched for some bouldering.

The following ten days there was not so much to do. Bad weather, super high winds on top and snow down to Base Camp required a lot of patience. The expedition challenged our minds. We were already so close to the summit on our first attempt, the last cornice that forms the summit was well within our grasp.

On the evening of July 13, Karl Gabl, our meteorologist back in Austria, gave us a promising forecast. Not the perfect window, but at least the conditions on the wall acceptable due to clear cold nights. Now Matthias was on board. On July 14 at 4am, the team complete, we commenced the final try.

The first two days went smoothly. After a spectacular bivy on a tiny and exposed snow mushroom we climbed without problems up to 6600m on the second day. Just upcoming winds and spindrift on the last mixed pitches made the climbing a little bit inconvenient. We had another hard night and our little tent nearly collapsed because we were totally snowed in. The winds were still high and spinddrift continued all night long. The next morning was cold and grey. We tried to climb higher but couldn´t. After 200m we found a little crevasse where a tunnel formation lead inside. A perfect shelter, no winds, no spindrift which allowed us to wait for the next two days.

On the morning of July 18 the winds calmed down and the weather cleared up. It seemed our last chance. At 6am, as the sun rose we set off. The following mixed part was hard, our toes and fingers were freezing and the long traverse out to the ridge on glared ice was very exhausting. At 7000m we made a small break before going for the final ridge. The first step to gain the height of the ridge turned out to be not as hard as Steve (House) described it. We traversed directly on the highest spine and gained easier terrain. The conditions worsened as we climbed but we knew that soon we will be on top. Getting progressively slower we traversed towards the highest point and at 12:30pm we couldn´t believe it. We couldn´t climb higher, the summit. We had tears in our eyes as we embraced each other. We reached the end-and-highpoint of the last month and enjoyed the wonderful view overlooking the sea of fog of the Karakorum Mountains, where just the highest peaks poked through. Kunyang Chhish East is no longer unclimbed and a great project of the Karakorum is finally complete. 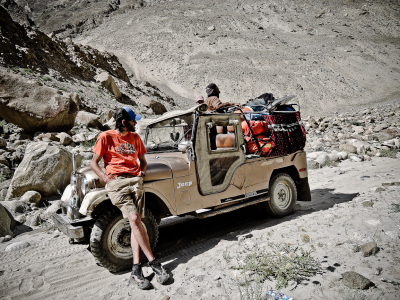 The wild jeep rides of the Karakorum. 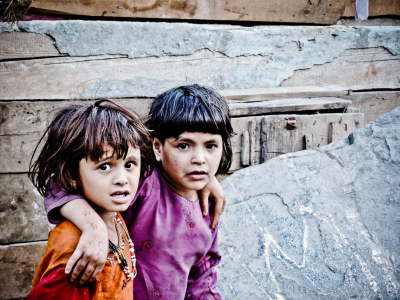 Feeling always kind of at home playing around with the kids. 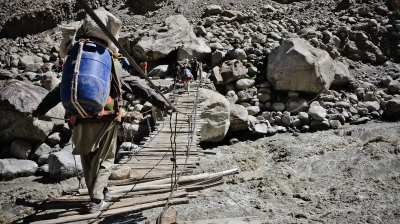 On the way to Basecamp. 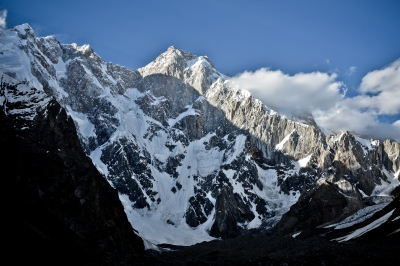 Feeling small while looking the Southwestface. 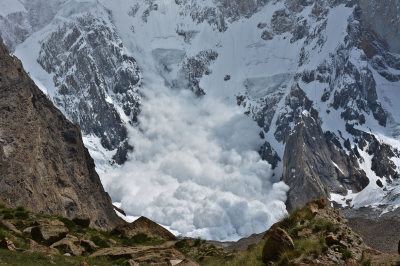 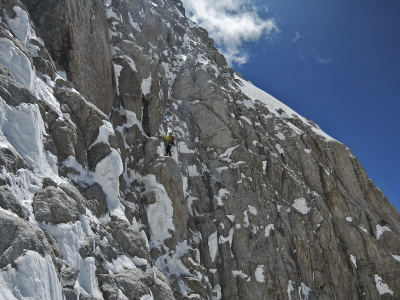 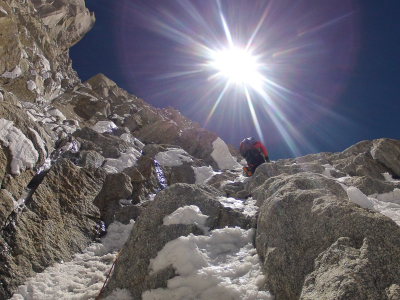 Simon on some easier terrain. 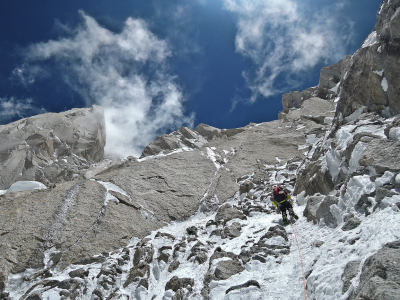 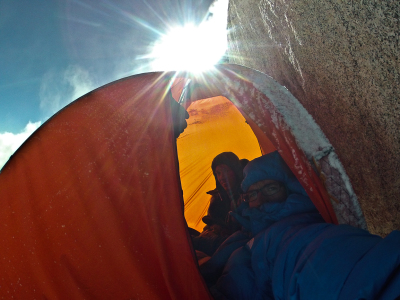 Just before the stormy night at 7000m after three days of climbing during the first attempt. 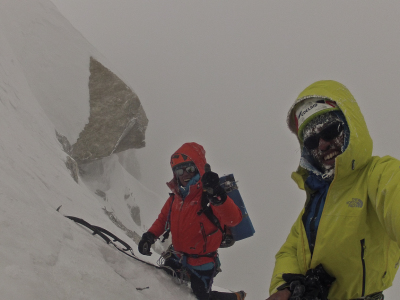 Happy to have Simon on my side. 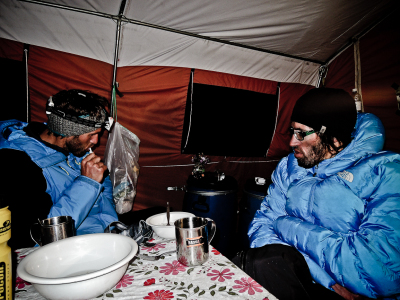 Tired and happy to be back after the first attempt. 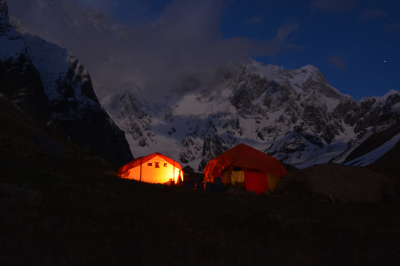 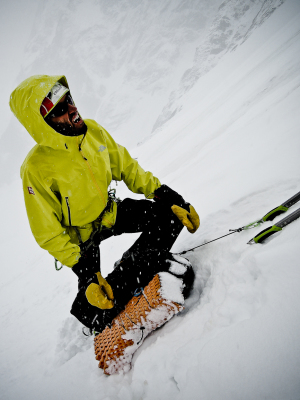 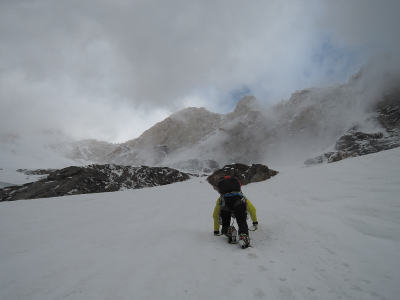 Down climbing with the headwall in our neck. 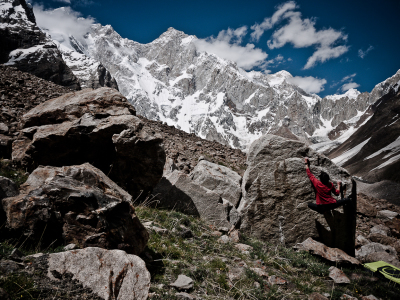 For a change fun on some small rocks. 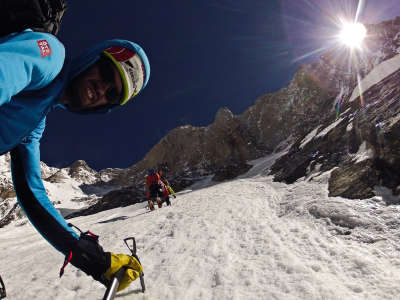 Great conditions on the final attempt. 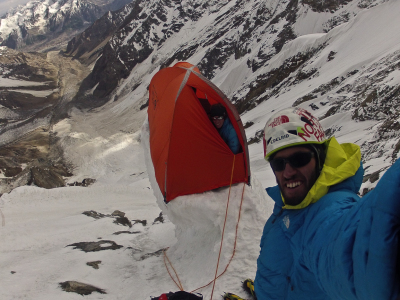 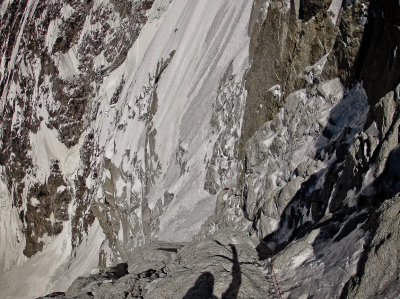 View down the face. 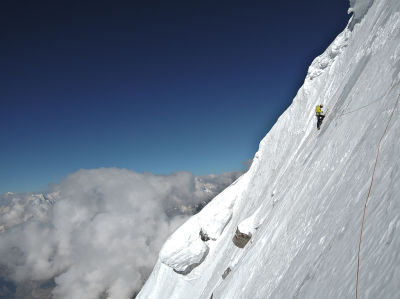 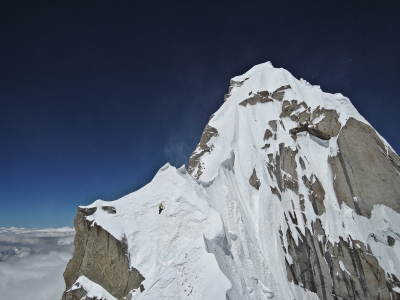 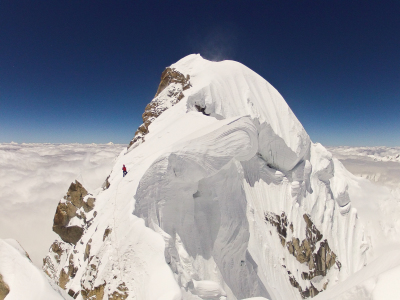 Summit of Kunyang Chhish East visible for the first time. 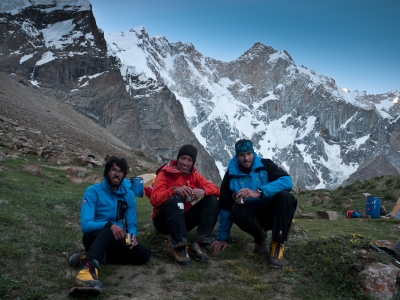